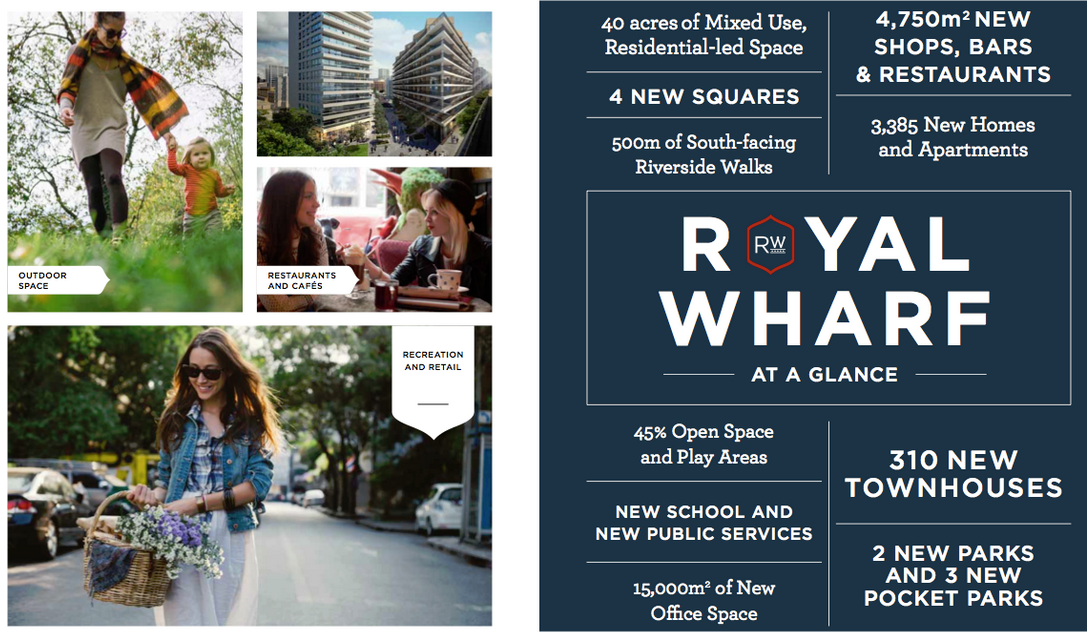 Royal Wharf is an exciting mixed development located in East London’s Royal Docks, with a massive land size of 40-acre. Oxley Holdings plan to develop this area into 3,385 homes, which consist of residential units, commercial, retail, leisure and educational facilities, creating an entirely new and vibrant district for London. Upon completion of this massive project, it is estimated that around 10,000 people will live in the Royal Wharf Area. It is the largest London development opportunity to come to market since Battersea Power Station. The ambition at Royal Wharf is to create London’s next great estate, a successor to the districts that have for centuries given the capital its world-famous character. The development of Royal Wharf will led by Oxley Holdings Limited – a SGX listed developer based in Singapore. The master plan and buildings at Royal Wharf have been designed by an internationally renowned team of designers led by Glenn Howells Architect.

Royal Wharf London is strategically located near to an upcoming Crossrail station, which will be completed in 2018. With this Crossrail station, Royal Wharf is merely 8 mins to key location in Zone 1, bring it closer to Prime Central London. It is also well served by international connections from London City Airport and boat links from a proposed brand new pier. Since the transformation of Canary Wharf into one of Europe’s most powerful business districts, London’s centre of gravity has been moving east, a shift recently consolidated with success of the 2012 Olympics. A brand new riverside district in the form of Royal Wharf will consolidate London’s dramatic east-facing reinvention.

Royal Wharf offers a blank canvas to create something very special for London. It has over 500m of river frontage with a Crossrail station 1km away. Royal Wharf has planning consent already in place for a 363,000 sqm development, with 3,385 homes, a new school, shops, offices and riverside restaurants, catering for a population that is estimated to reach 10,000 by completion. Royal Wharf offers potential to become the new “great estate” for London. The current planning permission, which means the development is “ready-to-go”, includes a riverside walkway, new streets connecting parks and squares, as well as new apartment buildings with views of the River Thames, terraced mansion blocks offering generous family sized apartments and a range of townhouses, and private parking.

Unlike many of its central London cousins, however, Royal Wharf has the benefit of the immediate proximity of the widening river Thames. There is nothing else in the capital quite like the big skies and breathtaking views that are found out towards the river’s east. The change in the context informs a key architectural difference, that whereas the original Georgian squares tended to be built to the front of their surrounding properties, the squares of Royal Wharf are accessed from the back garden, creating a private space for those who neighbour them, a green enclosure to complement the blue of the water. Royal Wharf is jointly developed by Oxley & Ballymore UK – a reputable developer who has developed numerous projects in London which include Embassy Gardens, London City Island, West Hampstead Square and etc.

Designed by Singapore-based reputable firm DP Architects, these two apartment towers are to be developed by Oxley Holdings Limited and Ballymore and comes with panoramic view of River Thames and O2 Arena. The 15ha development is conceptualised to be a new residential, business and leisure destination with panoramic views across the River Thames.

The proposed 40.25m and 58.25m tall apartment towers are located on Plots 17 and 18 within Royal Wharf Phase 3. The Marco Polo Building on Plot 18 is the final and tallest waterfront building anchoring the entire development’s corner, consisting of three vertically stacked building boxes. Its striking silhouette along the Thames waterfront is created by the subtle tectonic shift of these three boxes, unifying the housing block into a single twisting urban entity. To maintain the strong master planning relationship with the adjacent Marco Polo Building, the James Cook Building utilises a similar façade treatment while reversing its colour palette for subtle differentiation. 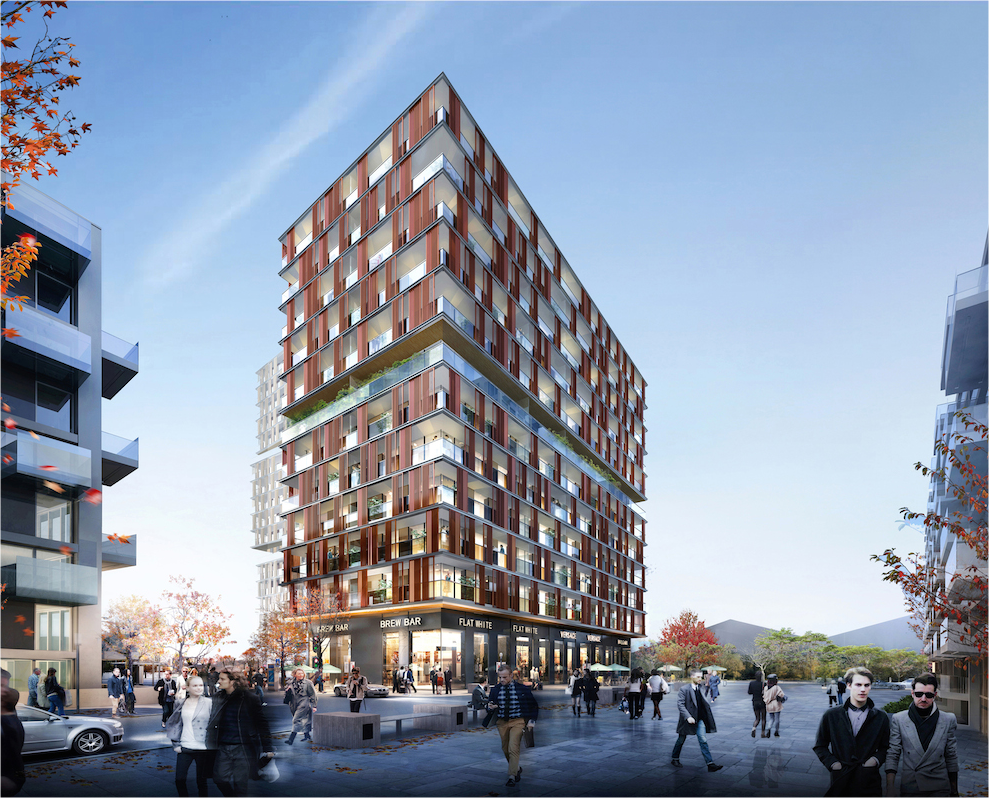 Inspired by the varying patterns of London’s weather, the building’s façade and character is designed to modify with the seasons, as the façade louvered screens are movable. Each unit has the ability to adjust the position of their sliding louvered panels to provide sun and wind shading capabilities depending on the weather or season. This gives the building façade an organic and lively feel – similar to the fluctuating seasons in nature. The sliding panels, combined with the dynamic twist of the blocks, work together to create a high-impact flagship design. 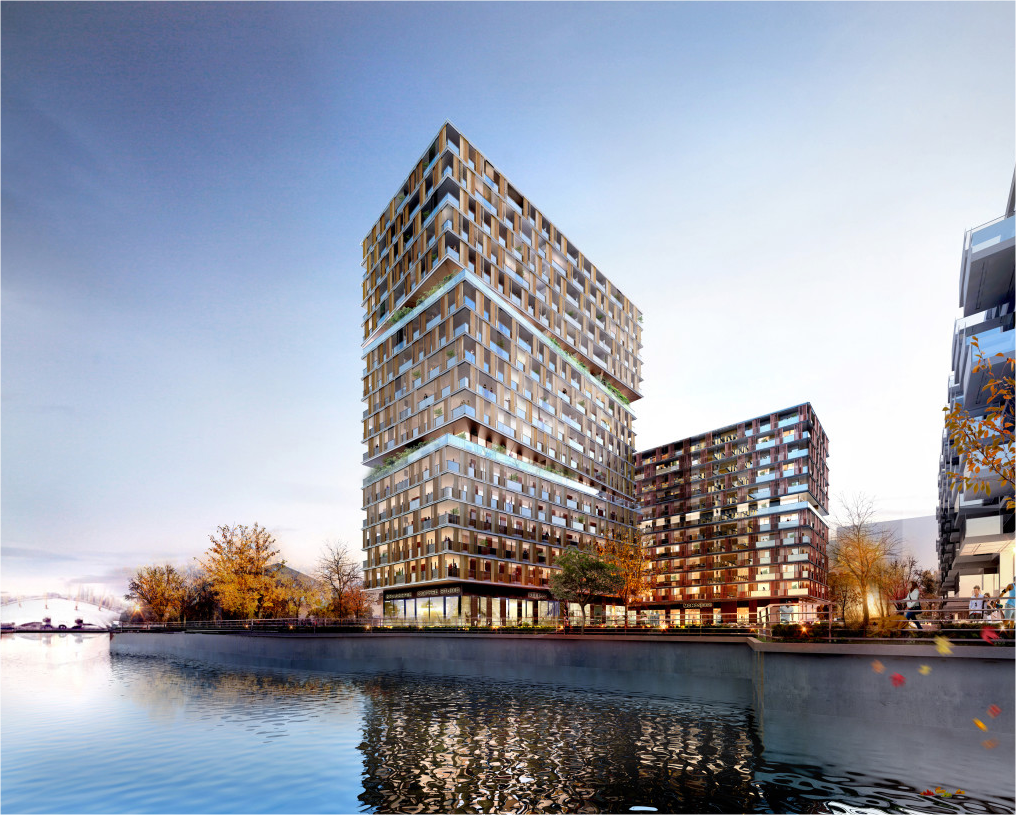 Capitalising on the river views, the top and lowest blocks are gently rotated on a central axis towards Canary Wharf, creating views of the water even for east-facing units located away from the water’s edge. The middle block, consisting of apartments on the eighth to the 13th storey, is then rotated in the opposite direction to provide views of the new pier. The middle block also leans towards the green plaza and overlooks the Thames Barrier and Thames Barrier Park.

The James Cook Building AND 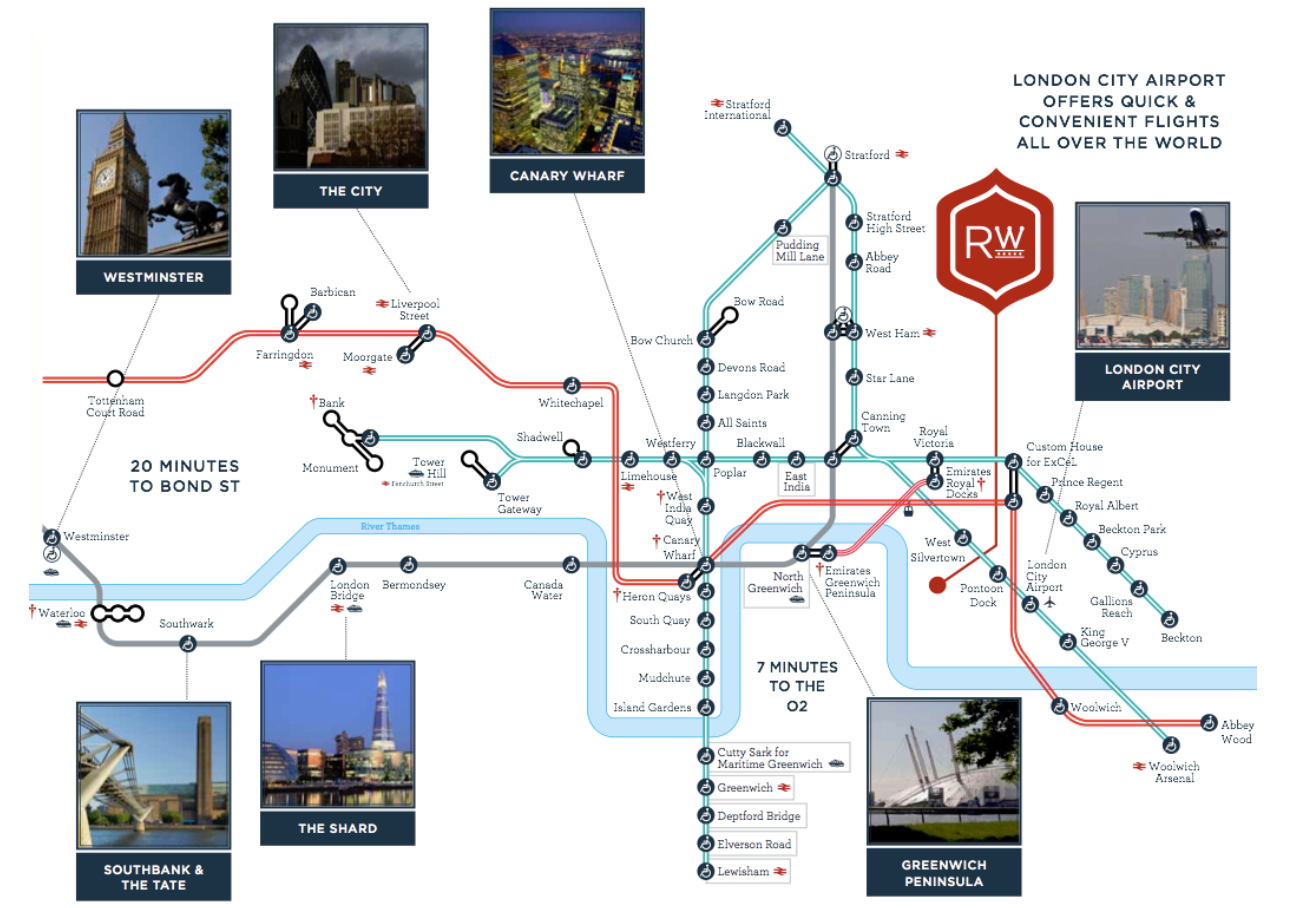 Royal Wharf Location is one of the best in London. Royal Wharf London has excellent transport links into the heart of London via the Docklands Light Railway (DLR), a new Crossrail Station (Custom House) which will be completed by 2018, the Jubilee Line (Canning Town) plus international connections from London City Airport and boat links from a brand new Thames Clipper Pier. 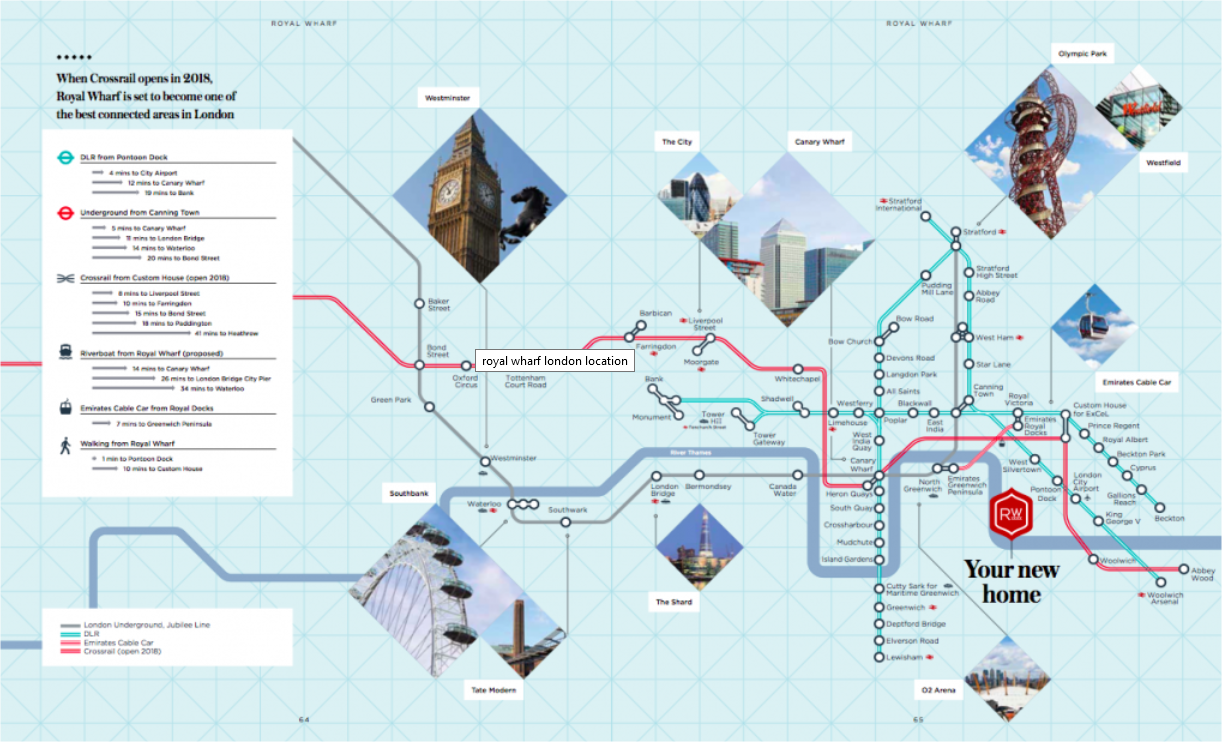